A Compendium of Executive Severance Reviews and Notices 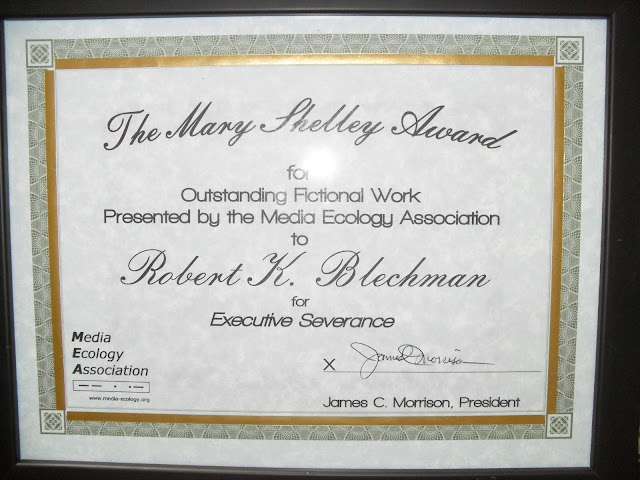 Here at last in one post are all the great reviews, awards and notices for Executive Severance!

"The writing technique became a legend of its own, making the novel a hit. In fact, Blechman invented a whole new genre: Twitstery.

Blechman’s Twitstery has its own metamessage, too: Wow, this novel is made up of tweets! But that’s not all. There is also a good story.
Executive Severance should occupy a place in world literature as the detective novel with the most direct or indirect McLuhan quotes.
Despite the prevailing new media signals, this is a classic well-written detective story. Critics were right to note author’s wit and humor."

Then there is On Twitter Literature, my guest blog on the Indies Unlimited blog site ("Celebrating Independent Authors").

"I believe there is hope for Twitter as a creative forum. To challenge the negative responses to Twitter I conceived a literary experiment: I would attempt to write a mystery story one Tweet at a time. I coined a new term Twitstery for the Twitter mystery genre and created a Twitter account '@RKBs_Twitstery' as a container for my detective tale. Starting on May 6, 2009 I posted a new tweet twice a day, every day, for 15 months, never missing a deadline."

Then there is Jerry Seeger's insightful review,"A Novel Written in Tweets" where he notes:

"There were occasional tweets that I sat back and admired just for their economy. Wee tiny poems. One thing for sure, doing a story in this medium requires skill (and the willingness to drop the occasional punctuation mark).

It is a thought-provoking story, not so much for what it says, but for what it is. Which is something the story itself tells us."

"Writing a novel using twitter seems such a daunting task, and yet Blechman persevered and did it with certain panache."


My Books and Politics web interview is still available. Starts at about 50:00 http://bit.ly/199KGDR

Glynis Smy's fantastic indie book promoting page where she celebrates authors and their books and many thanks to everyone over at Indies Unlimited for their support!

"The book is a fast read, short and sweet, but it is worth the experience. If the reader is not laughing or wincing at the pun, or noting a particular reference, you are certainly enjoying the easy flow of the novel.

Throughout the book, there are a number of illustrations that are perfectly suited for the theme, done by crack cartoonist David Arshawsky."


Insight from Jeff Tone of The Liberal Curmudgeon

"Tweets are integral to both the form and plot of the novel. Along with this device are more traditional elements: a romantic interest, an evil character and a suspenseful ending. Blechman has succeeded in giving the genre a uniquely contemporary twist in this innovative, humorous and entertaining “twistery.”

"...Executive Severance is probably best enjoyed for what it is, a series of loosely connected comic tweets."

Plus the following outstanding comments:

"A delightful 'twitstery' - a mystery written in real time Tweets - that is compelling, entertaining, and shows off what can be done in the 140-character form with style and mastery. Blechman's delight in the language shows in every tweet - that is to say, every thread of the story. His plot is tight, tingling, and diverting. Poe would have been proud of the new form Blechman has given to the mystery story."
-Paul Levinson, author New New Media (now in its 2nd Edition) and The Plot to Save Socrates

"Executive Severance, a laugh out loud comic mystery novel, epitomizes our current cultural moment in that it is born from the juxtaposition of authorial invention and technological communication innovation. Merging creative text with new electronic context, Robert K. Blechman's novel, which originally appeared as Twitter entries, can be read on a cell phone. His tweets which merge to form an entertaining novel can't be beat. Hold the phone; exalt in the mystery--engage with Blechman's story which signals the inception of a new literary art form.”
- Marleen S. Barr, author of Envisioning the Future: Science Fiction and the Next Millennium

"A He Dunit. Sometimes a little verbose, but OMG this is the best twitstery I ever read. It's got everything: narrative drive, mystery, comedy, thrills, tension, laughs. Blechman is on to something, a genre as important to literature as the invention of haiku in rhyme. ..."
- Marvin Kitman, author, The Man Who Wouldn't Shut Up: The Rise of Bill O’Reilly

“Embracing the challenges found in publishing via the medium Twitter, Bob Blechman’s super silly story Executive Severance is stuffed with punny dialogue, clever character conditions, and a total lack of adherence to the old “rules” of storytelling. It’s a meaty tale told in deliciously rare, bite-sized chunks that I'd recommend for consumption to anyone hungering for fiction that satisfies. Well-done, Bob!”
- Michelle Anderson, mediaChick, author of The Miracle in July - a digital love story
Posted by Unknown at 9:33 AM

World Visitors To This Site

Link to "The Heart of the Matter"

Link to "A Savage Mind on Madision Avenue"

State: Amazing Ourselves to Death